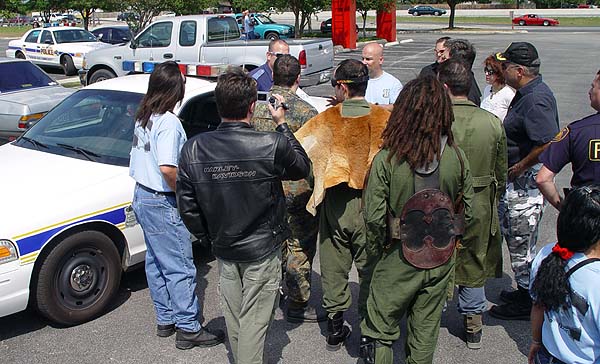 SAN ANTONIO, April 18 2005 (UPI) — A group of fans re-enacting a scene from “Mad Max 2: The Road Warrior” have been arrested and charged with obstruction of a highway in San Antonio, Texas.

Eleven “Mad Max” fans were arrested and charged Saturday during their theatrical convoy from Boerne to the Alamo Draft House in San Antonio for a movie marathon, the San Antonio Express News reported.

The police report cites multiple calls from motorists who reported a “militia” armed with machine guns surrounding a tanker truck. The guns were replicas and the truck was part of the performance, but two of the arrested motorcyclists were also charged with possession of prohibited knives.

Chris Fenner, who helped organize the event, said the arrests were unfair. Fenner said he was riding a motorcycle behind the tanker truck, and the rest of the convoy was lined up behind him, not speeding or weaving in traffic.

Fenner said he had e-mailed police spokesman Gabe Trevino to warn of the event, and even invited officers to attend.