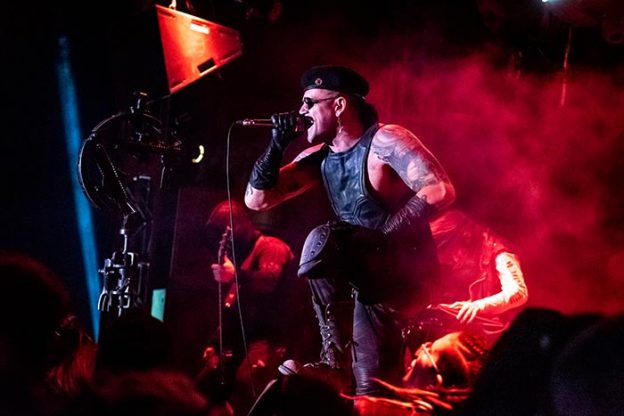 According to Metal Hammer, frontman Alexis Mincolla had this to say about the world’s largest post-apocalyptic festival:

The vibe was immersive to say the least, and when temperatures dropped to about 40 degrees and the wind speeds kicked up to about 50 mph, it made for a very wild night.

You can see hundred of real wastelanders banging their heads in the audience as they play on Wasteland Weekend’s custom-built pyrotechnic-equipped stage.

3Teeth has been the biggest nationally-known band to play at Wasteland Weekend to date, and wastelanders couldn’t be happier about their appearance.

But you know what? This wasn’t 3Teeth’s first rodeo. The industrial metal band’s first time at Wasteland Weekend was in 2015!

One of the coolest pieces of gear 3Teeth tour with is Mincolla’s tactical style microphone stand he calls “The Beast.” The Beast was designed and fabricated by veteran wastelander & professional prop maker Bruce D Mitchell, who originally met Mincolla on a movie set.

Mitchell told us that once Mincolla knew his band was going to tour with Tool, he commissioned Mitchell to build him the stand.

Mitchell tells us Mincolla’s original stand was a down-facing M-16 with surveillance cameras on it. When it was time to upgrade, Mincolla gave Mitchell creative license, but wanted it to look insectoid, robotic and militaristic.

It has traveled (maybe 5 tours now). It has accumulated some battle damage. I’ve fixed it up twice. The last time had some major reconstruction of the base structure. I’d love to do another mic stand from scratch. But a new version all around.